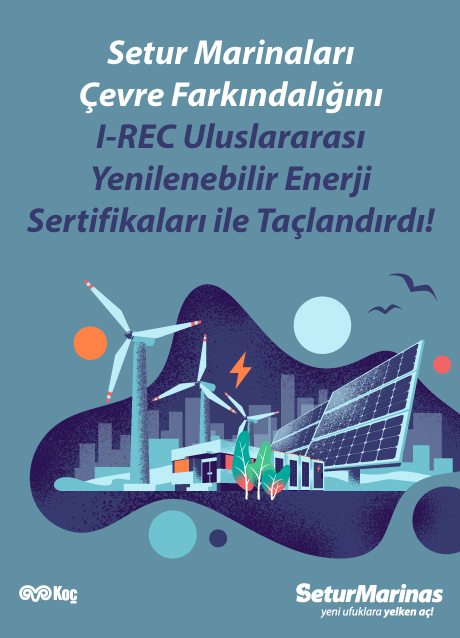 Setur Marinas crowned its environment awareness, getting an I-REC International Renewable Energy Certificate that is issued to those companies taking the energy consumed by them from renewable sources. Setur Marinas received I-REC International Renewable Energy certificate, as developed by International REC Standard Foundation based in the Netherlands, which is awarded with a view to popularizing renewable energy investment and use among businesses and consumers. The Company made this possible thanks to the renewable energy standard of the electricity generation and distribution company which is provided by it at Antalya, Ayvalık, Finike, Kalamış & Fenerbahçe, Kaş, Kuşadası, Marmaris and Yalova marinas. Thus, Setur Marinas purchased green energy equal to 12,812 MWH in 2021 and zeroed its Scope-2 electricity indirect greenhouse gas emission values, reducing them at a rate of CO2 that is equivalent of 5,970 tons. Greenhouse reduction was recorded at the rate of 90% in the same year for overall scope 1 and 2 greenhouse gas emissions due to operations run at marinas, when compared to 2020. Also, the company certified that it procured the entire electricity consumed at Antalya, Ayvalık, Finike, Kalamış & Fenerbahçe, Kaş, Kuşadası, Marmaris and Yalova marinas in 2021 from 100 percent green energy sources through I-REC certification. Doruk said, “We have speeded up our renewable solar power investments and energy efficiency projects” Emre Doruk, General Manager of Satur Marinas, in his statement on I-REC International Renewable Energy Certificate issued to Setur Marinas, said, "We, as seafarers loving and respecting the sea and nature, have been working, for many years, in countless areas ranging from energy to recycling so that our marinas are eco-friendly. We are pleased that we have received I-REC International Renewable Energy Certificate. The fact that we have received this certificate is of paramount importance in that it documents sustainability steps taken by us for conservation of the environment. We aim to procure the entire electrical energy we are to consume in 2022 from green energy sources as part of our studies intended for compliance with "2050 Carbon Neutral" goal associated with the carbon within Koç Holding Carbon Transformation Program which we pursue in this scope. We have also speeded up our renewable solar power investments and energy efficiency projects which will continue in 2022." Setur marinas is also taking steps towards ‘2050 Carbon Neutral’, being aware that structural changes are required in order to be able to achieve the goal of limiting the global temperature increase to 1.5 degrees Celsius as set forth in Paris Agreement. Setur acts with the guidance of principles “Goal 13-Climate Action” and “Goal 7-Accessible and Clean Energy" which are among Sustainable Development Goals on the carbon neutral roadmap.